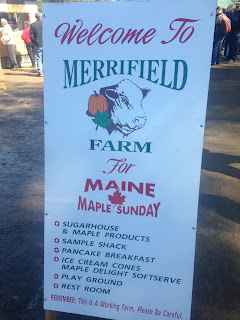 A Tradition in Maine going back generations is Maine Maple Sunday .This event is always held the 4th Sunday in March. This year it was a little messed up with Eater on the 4th Sunday. So instead of
Maine Maple Sunday it was Maine Maple Weekend. There are many farms in Maine that "tap" their Maple Trees , boil it down and make syrup, along with a few other treats. If you have ever bought real Maine syrup you know that it is slightly expensive but this is why. It takes 40 gallons of sap from a tree to make 1 gallon of syrup. They can  tap a tree 2-4 times. This year was a little different because of our crazy warm/ cold weather. Most of the time I am not here for Maple Sunday but I do remember taking the hot syrup out on the snow and rolling it in the snow to make a lollypop type candy.
I know Matt and Aimee have tapped a tree on their property and made about a quart. Hatts off to the Maine Maple Syrup Industry. It's a product I would rather buy than try and produce myself. I feel the same way about clamming.

Another thing I have been wanting to do for years and finally did this Winter was  go to the Art Museum at Bowdoin College. The Building has a lot of history both old and new. The exhibits of course change all the time which makes it great any season. The best part is it is Free! The same day I also went to the Perry- MacMillan Arctic Museum, located on campus close to the Art  Museum. It isn't a very large Museum but interesting all the same. This is Free as well.

I was saying last blog about our random snow day at the end of March. The next morning the phone rang at 5:30AM from the School saying it was canceled. I looked out the window and not a flake of snow. Looking a little closer it wasn't snow but an Ice Storm. We only had 1 snow day all Winter and the last week in March we had 2, go figure.

Today Victoria and I spent several hours in the gardens getting ready for the opening. There isn't to much to do except for cleaning up all the dead stuff from the Winter. The ground is still partially frozen and we can still have frost and now they predict snow on Sunday. We were both nearly in tears when we saw that a deer ( or several) had eaten about half of the 200 tulip bulbs we planted last Fall. I want Matt to set up the Game Camera so I can catch them in the act.

I look forward to a Joyful 2016 Season and can't wait to see all of you. 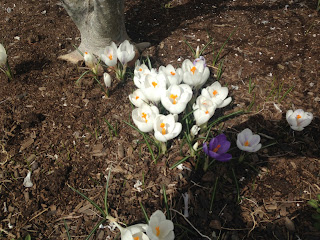