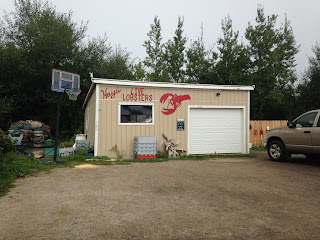 Even though the Calendar says it is September I have a hard time believing it. Where did the Summer go? Why do the Winters drag on by and the Summer goes with a blink of an eye. One way I did know that it is September is the School Bus' are back on the road. Yeah for School! The Inn on the other hand hasn't slowed down. We are as full in September as we are in July. We did have a cancellation for a time frame in October in the Merriconeag Room. This is the only room we have that can sleep 4 people with 2 Queen Size beds. It is a Second Floor corner room  and has a Spectacular View.

Often guests ask where to buy lobsters. I try and spread the business around but this time I want to give a Big Shout Out to Hay


s Lobsters. On Sunday my husband, Jon and Terrence went to Hayes Lobsters which is family owned and located at the head of Mackerel Cove, Bailey Island. They got 6 lobsters and Jon paid by credit card. The credit card machine wasn't working and he didn't have enough cash on him. At this point I am not sure why he didn't come up to the Log Cabin and get the money from me(  but that's a story for another day.) The Owner said Oh don't worry about it. I will just put your slip on the wall and you can come pay whenever you are back this way. This kept me awake all night, knowing that we owed them money. The next day I drove down to the store and saw the owner waiting for the kids at the Bus Stop. I put the window down handed her the money and gave a Big Thank You. That folks is what this Town is made of. Nice people doing nice things.

The 610ft Zumwalt  Navy Destroyer first in its class was built nearby at Bath Iron Works. It is set to depart for Baltimore, MD today. It will be Christened in Baltimore and then sailed to the West Coast and docked in San Diego. There are 2 more of the Zumwalt Class already in the works at BIW. Matt and I took the boys to see the Zumwalt this Spring when it was on Sea Trail. The Zumwalt has cutting edge technology and features an all electric propulsion system.  It certainly is a stealth modern day marvel. I suggest if you are in the area to visit the Maritime Museum in Bath located next to BIW. They have trolley and boat tours that will take you right past the Zumwalt.

Without any street lights or major intersection's  in Harpswell it is tough to have a true traffic jam but we did yesterday Harpswell style. On RT 123  near Skolfield Farms there has been a group of free range, actually they are penned in black pigs grazing. Yesterday they decided to escape and see how things were on the other side of the street. As pigs go they were not so fast about it. They stopped traffic for about 20 minutes, which got quite backed up. Police Officers had to come down from Brunswick along with the Sheriff to direct traffic and try and get the pigs to cross the street. This actually made the Bangor Daily News photo's and all. Ironically I would rather read about this than our Governor. 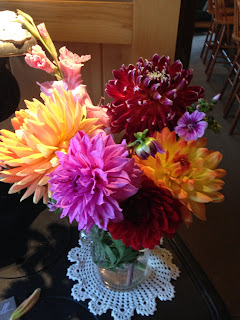