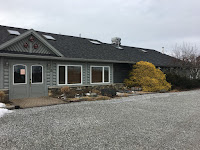 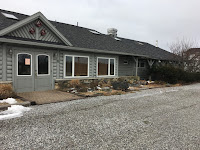 Happy New Year !! Well,  New Years was actually a couple weeks ago but at least I am still in the month of January. I had a great New Years Celebration with my family and Aimee and Matt's at Kingfield in Northern Maine near Sugarloaf Mountain. It just so happens that they got about 2 1/2 ft of snow the day before we got there. It isn't to often that it is hard to snowshoe because it is to deep.
The kids had fun snow shoeing, sliding, skating and just messing around outside. As you can see I was supervising from my Beach Chair and thinking of the days that I was Celebrating New Years in Key Largo.  The gang has also started the Friday Night skiing with Lessons at Lost Valley which is in Auburn. This great program is sponsored by  Harpswell Recreation and runs for 6 weeks. They ski and I run the Lodge for 62 participants. Can you see a pattern with me and the Winter Sports :) Actually it isn't that I mind the Winter Sports but after still being in Physical Therapy for 3 months with my knee I don't feel like starting over. I will however take part in the Snow Tubing event this weekend.

A lot has been going on at the Former Brunswick Navy Base, now called Brunswick Landing. It is home to over 100 companies and 1,200 Employees. The Job Growth and Economic Redevelopment is greater than they envisioned 5 years ago. Of the 24 bases that the BRAC Commission closed in 2005 Brunswick has been cited as the leader in redevelopment.  Many are awaiting the Opening of a new Brew Pub called Flight Deck Brewing which should be open this Spring. I urge you all to go and drive around. You can always pop in to the Indoor track and take a walk before your beer.

The ground was bare until we got about 4-5 inches of snow today but before that Matt tackled a project I have been begging Sue for years to do. Many of you wouldn't even notice this but since I park my car in front of it almost every day it annoyed me. It was a tall I say Juniper type Tree kind of yellow in color.  Many named it Cousin It. I guess one day it must have annoyed Matt because a few chain saw buzzes later and the thing was gone. Now that I think about it Sue will have to buy more plants to fit in that space! The outside door in the Wiseman Room has been replaced. Often in a rain and wind storm the water would come in. Both the Hot tub deck door and the Main door to the Mt. Washington Room have also been replaced. Aimee has been busy writing a lot of Confirmations. It isn't  to early to book your favorite room so you don't miss out. When the Spouse says " What about our Anniversary? " You can say " Don't worry I have it covered."

I hope everyone is staying warm and healthy. You can always visit us on the webcam or on our Facebook page or follow us on Instagram. 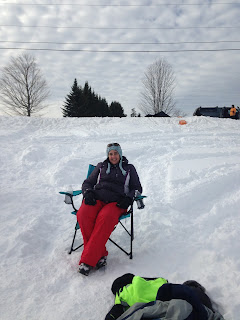