I am not even kidding 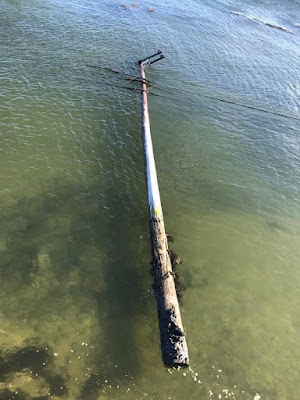 The day we closed, Sunday October 29th one of the last room guests asked if I would write about the storm we were about to have  the next day. Sure what is a little rain and wind going to do.  I did go to bed prepared with a flashlight just in case. The wind started howling about 3am and about 4:30 the power went out. When I finally started moving around about 6:30 I got the email message that there wasn't any school. This is only October and we are already using the allotted snow days. My next thought was,  is my Mom's 10:30AM flight actually going to leave. The airlines said it was on time so we ventured out. I was in no way prepared for what was to happen on the ride up Rt 123 to Brunswick.  Many, many trees were down, ripped right out of the roots on to the street and lawns and some on houses. There was one spot that the trees ripped the power lines across the street. I was able to go under one of them ( I know not the safest move). The other one they closed the road for but I was able to take a detour. To make a long story short it was one bad scene after another. Listening to the radio there were Half a Million people in Maine without power. Terrence and I spent most of the day in Portland because around the Mall area they had power. I got home and wheeled out our small pull start generator that runs basically the well pump, furnace, fridge and a few outlets. By nightfall they had already called off school for Tuesday. Tuesday was Halloween and they even canceled Halloween until Friday because most of the roads were unsafe to travel. Every day we were hopeful that Harpswell would be next to get power. Sue and Victoria got it back first. Aimee, Matt, CC and myself finally got it on Saturday, 6 days later.  It took Wendy 9 days to get hers back. The Harpswell kids were 5 days, the whole week without school. It is the longest I have ever been without power.

Aimee finally got to finish the laundry at the Inn from the day we closed . I started working on the outside gardens and digging up the dahlia bulbs.  Just as everyone was getting back in the groove and life back to normal the next storm hit. Early Friday morning November 10th the telephone poles and power lines that run along the Bailey Island Bridge fell over into the water. Needless to say Bailey Island was without power once again. The temperatures were down to 25 deg at night. After almost 2 weeks of working 24/7 Central Maine Power was hard  at work again. They could only work on the lines at low tide and for a portion of time they were working the bridge was closed in both directions. They did a fantastic job restoring power in cold, windy and less than ideal conditions. I did some more work in the gardens today and saw one pole still in the water.

We all are hoping for a less traumatic Winter but I am not so sure that is going to happen. I am already sick of losing power and we haven't even seen snow yet. 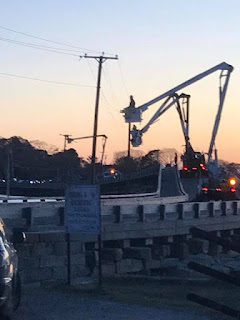 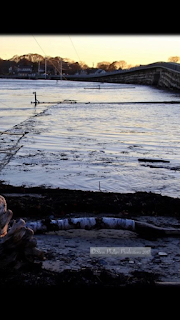 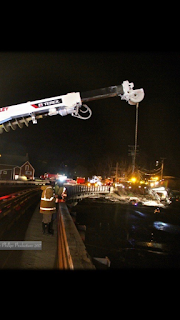 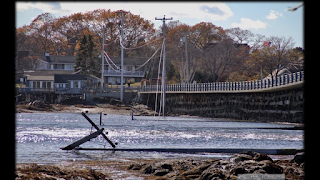 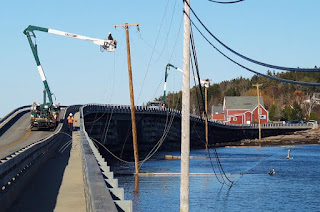