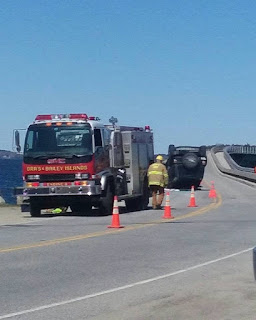 It has been awhile since I posted, I know sorry. Here we are open again for another fabulous Season. Sue has owned the building for I believe 37 years. Most of you know it started out as a Full service Restaurant with a waiting line every day. With success brings fulfillment but it also brings exhaustion. So 21 years ago Sue, decided to turn the Restaurant into an Inn. I was working for her at that time and enjoy this so much more.

The poor soul in the jeep above found out  the hard way that speeding doesn't pay. From what I can gather he was heading North and hit the wooden barrier on the South/ West side of the bridge which caused him to roll over. He wasn't hurt but the bridge was closed for awhile as they had to tow the Jeep away. I can say this is the first time I have seen that happen. I cross that bridge at least 4 times a day and I crawl, sometimes even stop if a large truck is coming across at the same time.

The Island is starting to come alive. Victoria and I have started in the gardens on the days that the sun has come out, which still hasn't been to often. It was only 42 deg today and very windy. The crocuses are out and a few daffodils. I have seen signs of tulips, the few that the deer once again haven't eaten. The rhubarb is sprouting, the rose hedge has buds and Sue had the Dahlia Bulbs delivered. Cooks is open Wednesday-Sunday right now. Cribstone Grill and the Giant Staircase both open today, the 20th. The Candy Store and Lands End are open along with the Dolphin Marina.

Terrence and I tried out something new today at Brunswick Landing. The Navy Museum and Gardens were open and they have a Very Cool flight Simulator. Terrence got to fly a P3 Orion and a Blue Angels plane. The P3's used to land on the runway only 500ft from where we were. The same runway that the Blue Angels will be landing on during their show this Summer. They are open now on Wednesday's and Sunday's. If you are here then I highly recommend checking it out. Also starting up at the Landing is a Finish based company called Atol Aviation. They plan to produce a flying boat! They can test it out on one of the two 8,000ft runways.

Our Spring Rates are good until June 18th. Even if you can only get away for a  night or two, it is still worth the trip! 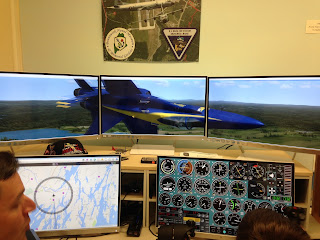