Hi, it is Alicia. I decided I would give Sue a break and I wanted to show you these pictures. It is the time of year that we  need to start getting creative and find new and challenging things to do. Terrence and I attended the 2nd Annual Downtown Brunswick Bed Races. Last Saturday the Downtown Assoc Sponsored these bed races down Park Row, which is next to the park on Maine St., where the Farmers Market is located. I had never been but said, lets go!!!  This was one of the funniest things I have ever seen. They had 9 teams entered and the street was so packed with people it was like the Macy's Day Parade ( well kinda).  The Cool as a Moose Team won ( defending champions) but I think the best design was the Maine Music Theatre. The TV Station all the newspapers were there as well.


Terrence and I went to Cape Cod for Thanksgiving. On the way back we  stopped in Boston to see the Grinch Who Stole Christmas at the Wang Theatre. We met some of our friends, they took the Amtrack Train from Brunswick to Boston. Yes!!!  that is right folks. The train has actually come to Brunswick. You can  ride it from Brunswick to Freeport or Portland for the day do a little shopping and come back to your cozy room at the Log Cabin Inn.

Today with the temps in the mid 30's we ventured off to  Bradbury Mountain State Park in Freeport. If you can believe this it is the first time I have ever been there. We went with Aimee and Matt and the boys as well as my sister and her family ( and Daisy). The start up was steep and I was thinking,  What have I got myself into,  but then when we got to the Summit and  the rest of the loop was good. We passed quite a few people,dogs and Mtn Bikes. We do not have any snow yet so at least we were not dealing with that. It was nice to be with the gang again. 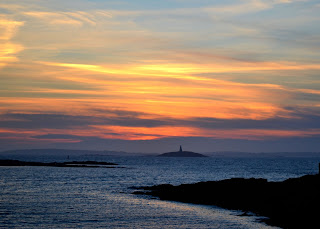 Matt takes some amazing photos......we publish them on our blog and Facebook often. This particular one was taken this week at sunset off of Lands End, Bailey Island. The Maine Office of Tourism shared it on their Facebook page, and within hours it was shared by over 340 others! The whole social media phenomenon is quite interesting. Little did we know a few years back what an impact it would have on us. Yes,I know there are good and bad facets, but personally, for the Inn, it is a good thing.

Our work has started on our winter renovations....we are re-grading the driveway, jacking up the little garden shed, replacing some door frames, shingles, windows......on and on and on. It is hard to believe we are beginning our 33rd season in 2013.

Thanksgiving is coming right up. We at the Log Cabin have so much to be thankful for....33 years....beautiful Bailey Island......and a huge group of super, super guests! Thanks to all of you and hope you have a wonderful Thanksgiving! Sue 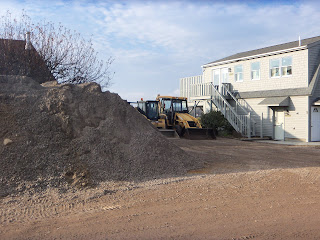 Well.....here we go with our off season renovations! My nephew, Nat, played in the driveway yesterday, and made this huge pile of dirt! Over the years we have trucked in loads of crushed rock and it was time to "re-grade" the driveway. So, now, we are going to truck this pile of dirt away....and put some fresh crushed rock down. Good luck to Matt when he has to plow this winter with fresh crushed rock! Anyhow, it will be good to get this done before the ground freezes. That is one problem we run into trying to do any outside renovations in the off season.

The weather is holding on....suppose to be 55 degrees here tomorrow! Still have some flowers blooming. Gotta like it!!

Had an early Thanksgiving dinner yesterday at our house with the family as we will be away on the actual Thanksgiving day. Our family is growing.....my younger son, Adam is engaged and getting married in the spring. This is very exciting!! We welcome Tamara and her darling daughter Frances to the family!

Happy Veterans Day to all, Sue 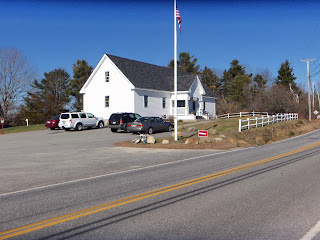 Well, election day is finally here. Those of us on Orr's and Bailey Island vote at this cute little building....the Old Orr's Island Schoolhouse. Every year, the same folks work at the polls (a job my Mom used to love to do). Over 1000 of the 4000 registered voters in Harpswell voted early. A friend of mine processed the absentee votes yesterday. Unfortunately, she does not know the results! Well, we should know most of the results tonight or tomorrow--we hope!

We have been closed for 8 days, survived Hurricane Sandy, and are now braced for a nor'easter this week. My thoughts and prayers go to all of the folks in the devastated areas that suffered so from the recent hurricane. We were very fortunate here in Maine.

We have started to make our "winter repair list" for the Inn. It is quite a list....it is every year. Should keep Matt and Aimee busy! My other son, Adam will be working on it also. It is a good thing we are seasonal so we can keep up with all the repairs!

I hope you all got out to vote, and know that at least some of us will be happy with the results! Stay safe, happy and healthy! Sue