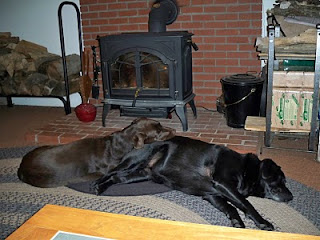 As you can see, my lazy labs were not very stressed about the holidays! Hope you all have a safe, happy and healthy holiday season.
Posted by Log Cabin Maine at 12:09 PM 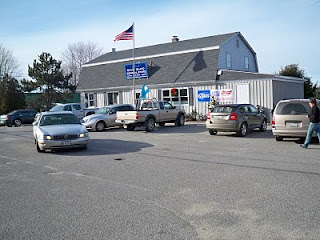 This is a very exciting weekend on Bailey Island. Cooks Restaurant had a fundraiser for the Harpswell Heating Program last night, and it was packed! They had carollers, Santa, free snacks, and a silent auction (of course, a night stay at the Log Cabin was donated). There were all sorts of locals there chatting, eating and bidding on the auction. It is the second year Cooks has done this, and hopefully will be a holiday tradition. The sense of community was overwhelming....actually brought me to tears.

Today the Bailey Island store is re-opening after months of being closed. As you can see from the picture, it is busy! A local family has purchased it, and we wish them success! It is strange how much you miss something when it is no longer there.

Speaking of purchasing something, the community has purchased the Post Office so it should stay open for the next 5 years. All of the money has not been raised, but little by little the goal is within reach. For those of you who do not know, the Post Office is right next to the General Store.

Another community event happened on Friday. The Harpswell Nursery school had their Christmas pageant. Of course I attended to see my grandson Josh sing. Well, Josh decided that the crowd was too intimidating, and sat in his Mom's lap instead. Still, watching the other 3 and 4 year olds sing Christmas songs was fun as their families looked on. Josh, however, was not shy when it was time to get in the lunch line! He was first........takes after his Dad with the appetite!

The weather sure did take a turn....my flowers I was picking in early December are long gone. After a brief trip to Key West, I flew home to Maine on Wednesday. It was record heat in Key West, and record cold here in Maine. I woke up to 85 degrees and 98% humidity and returned home to 13 degrees!! Try to dress for that trip!

Hope you all have a safe and Happy Holiday.......looks like the big storm may put a damper on travel. 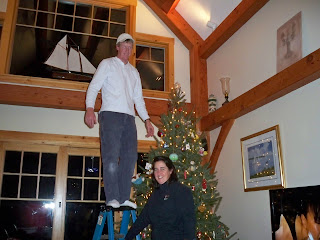 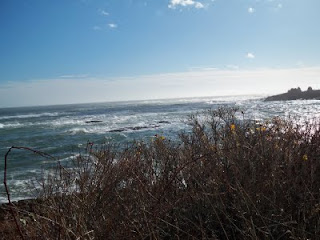 Well, we had some wild weather this week!!! Record high temperature of 68 degrees one day, then massive rain and wind on the next. My 3 year old grandson suggested we go to Lands End to see the surf (that is the picture from there). It was so windy you could barely stand. The sun came out and it was quite spectacular. As Josh said, "Mimi, it is like a hurricane with no rain!"

Then we got snow this weekend.....only in Maine. The winter colors are very vivid....the white now makes the ocean look even more blue. Now, it feels like the holiday season. As you can see from the other picture, Matt helped Alicia with her tree.

We went to Cooks Lobster House on Sunday moring for their new brunch. They are serving from 10am-2pm. It is a very large buffet with everything from eggs to shrimp!

Lots of phone calls and reservations this week. I need a secretary to help me keep up!

Happy Holiday Season to All! 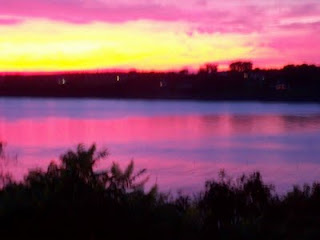 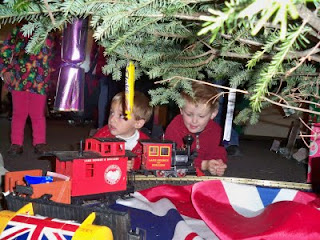 I hope everyone had a nice Thanksgiving....we sure did. I am still full 5 days later. The weather continues to stay mild. This is good as my sons, Matt and Adam are starting some work on the outside of the Log Cabin. If you check out the poll question you will see that it is a bit old. And an "old" building made out of wood on the top of Bailey Island gets pelted by the weather.

Speaking of "old", most of you were correct, Matt turned 39 yesterday. He made it through hunting season without getting a deer. He claims to have seen some and even shot at some, but I think that is like the fish that got away story......

Sunsets remain gorgeous....actually I think they may even be more vivid in the winter. Why is that? I will have to google that question and find out an answer. Actually, this sunset picture is a bit blurry.....looks more like a water color, but you can appreciate the color--maybe the camera was cold.

I just hung up from taking a 4 night reservation for next August for a honeymoon from a very nice military gentelman. We all appreciate what the military does---even as the last squadron left Brunswick Naval Air Station this week. We will miss our military friends, and hope to see them all in the future.