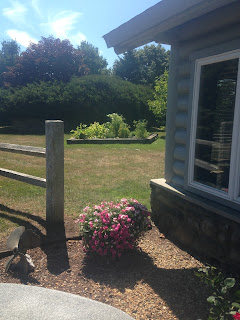 It doesn't seem possible that tomorrow, August 24th Terrence will be back at School and starting the
5th Grade.  Danny will be entering High School and Josh will be starting Middle School both on September 5th. I am not sure what happened to Summer but it didn't seem like it existed this year. The kids got out of school late, it rained all Spring and most of June. Now we have been in a drought July and August. The grass is brown and crunchy and we have spent hours every day watering.
We haven't had any really hot, hot days and now it looks like the temperatures will be in the mid to low 70's for a couple of weeks. I like that crisp Maine air that Fall brings. Howver I did not like the fact that I only got to Stovers Cove Beach one Friday this Summer. Mother Nature did not cooperate on Friday's. Speaking of Stovers Cove there was a very large fire there last week. I could see the flames up above the tree line from the lawn at the Inn. The black smoke roared for quite some time. Luckily it was an abandoned building and some of the trees as well caught on Fire. As I stated before we are very fortunate to have 3 Fire Stations in Harpswell that responded very quickly and no one was hurt.

This weekend Brunswick is hosting the Great State of Maine Air Show.Once again the  highlight  is the Blue Angels flight team. I saw two of them fly in last night. You can hear them long before you can see them! I hope to get on the water and head North on  Merriconeag Sound. The Sound brings you up almost to  the end of the runway.
I recently went to the Maine Maritime Museum in Bath to see the new Lighthouse exhibit. What a fascinating exhibit it is. It is a Full scale Replica of the Cape Elizabeth Maine Light

house tower lantern room. The exhibit is the first of its kind anywhere. The Museum also is restoring the 1906 Schooner Mary E. It was built in 1906 at the sight of which is now Bath Iron Works. The Schooner has an extensive and very interesting History.

Often it can be the little things that one needs to appreciate in life and I am so excited to see one of our trees cut down. This tree was at the corner of the building just outside the bar. Now that it is down I don't have to struggle to climb over the rock wall to get to the Vegetable Garden. It also opens up the whole area and brings so much light into that corner. So much so Sue had to go out and buy more plants if you can believe that.

I hope you all have a Safe and Healthy Labor Day Weekend. Our September is very busy but we do have openings toward the end of the month and into October. We will close this year on Saturday October 28th.