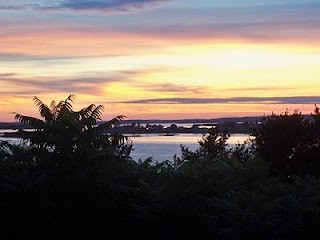 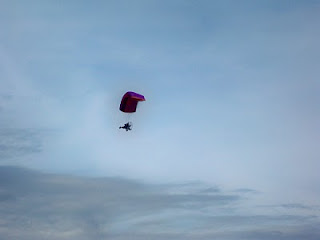 You never know what you will see while sitting in your Hot Tub at the Inn. This is a photo of my Brother in Law, Fred flying around the Island and entertaining both himself and quite a few people on the ground.

Apple Season is here and the growers have taken a huge hit. One grower said that he had lost 90% of the crop due to a late frost in May. Aimee and I went on the kids Apple/ Hay Ride Fieldtrip this week and the only thing plentiful was the pumpkins. It was such a warm Summer that the pumpkins came early. Some growers could even plant a second crop. According to the growers the trunks froze and all the blossoms toward the bottom of the trees froze. So if you are lucky and tall like Matt you could pick them using a ladder. Mother Nature who can figure her out. Like today, it is 80 deg in the end of September.

We are open only 35 more days this season. Every year it seems like it goes faster and faster. I am very happy to say we have had 100% occupancy this September, can't do much better than that. September is beating out August.

The whole town is a buzz and very happy for our local standout Mark Rogers who is pitching with the Milwaukee Brewers. He has closed a couple games with no hit innings and started his first game last night against the Florida Marlins.

The answer to the pole question was Florida, which 66% got right. The Withlaooochee River is both in North Central and Central Florida. 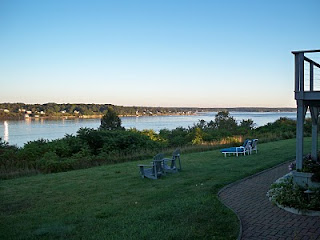 The sun is just rising at the same time I arrive at work now. The days are shorter, and brisk. We even had to light the fireplace one day. I love this time of year! Only problem is that we close in 6 more weeks. I get asked frequently if I am anxious to close, and the answer is "No". I love the Log Cabin. Our crew is the best anyone could ask for. Our guests are the most amazing people. I also love to cook breakfast. Today I am making waffles, ham and banana pecan muffins. Laura will be in shortly to make the fruit. This morning all 9 rooms are return guests---making it feel like one big family.

Last night was a silent auction for the Harpswell Community Nursery School. I was very brave and gave Aimee and Alicia a signed check and told them they could bid for me. I wonder what I bought, and how much I spent? Will let you know.

Off to cook breakfast! Sue
Posted by Log Cabin Maine at 3:54 AM 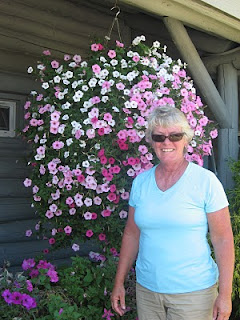 Today is such a glorious day with the sun shinning and a slight breeze. It was just like Sept 11th nine years ago. It was one of those days that everyone will remember and I am no different. Jon and I were still working on a Yacht together and we had just left Montauk, Long Island, NY headed to Nantucket when we heard. We just couldn't believe it, our Boss at the time owned all the fiber optics layed in NYC and his office was Downtown. We tried several times to reach him but all phone lines were tied up. Finally the next day we heard that he was safe and not yet made it to work when the Towers came down. A very good friend of ours, Larry Silverstein owned the Twin Towers. The devastation that he and his family had to endure was unbearable. They have already rebuilt 7 World Trade Plaza and have tenants occupying the building. It is truly a beautiful place with a park and art work every where. It has been a painful process dealing with the Port Authority on the Twin Tower location but progress is being made there on the rebuild as well. God Bless the families that lost loved ones and the Hero's that are still with us.

As I reflect on this day I am grateful for my beautiful family and the happy and magnificent place that I work at.

The poll question was almost a landslide, 90% of the people were correct that Danny is in Second Grade, and lovin it. Josh and Terrence started Nursery School this week and after a rough start Josh is still going and Terrence would go every day.

PS. Just so you are not confused, Alicia wrote this post, not Sue.
Posted by Log Cabin Maine at 1:16 PM 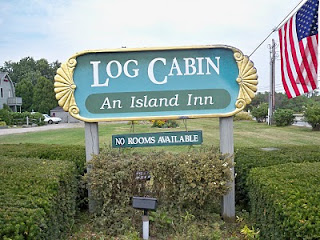 What a summer we have had! The No has been out on the sign almost every day. And September is already 93% full with reservations. There is more room open in October if you would still like to come visit.

Some weird things have been happening too. Matt had a gentleman ask where the closest hardware store was. Matt asked what he needed, and he said he needed to fix his leg! He had a prosthesis that had broken. So, Matt fixed it for him! One of our regular guests said "Well you guys really do it all!" And I had an egg casserole blow up in the oven---what a mess. So, I spent 2 hours in the 90 degree heat cleaning that up! Now, we have guests here for 2 separate weddings with the Hurricane Earl predicted to pass by. Actually, it looks like it will miss us. I will let you know.

School has started back up. One of the long term morning news broadcasters said "I can't remember ever broadcasting that schools in Maine were closed due to the heat." We had a 4 day heat wave this past week that was very uncomfortable. I cannot ever remember Bailey Island being hot for this many days. It should cool down after the storm passes by.

Hope all is well with all of you, Sue
Posted by Log Cabin Maine at 11:25 AM