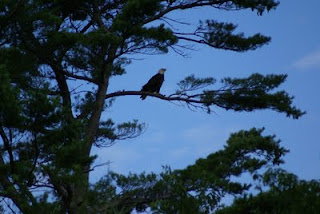 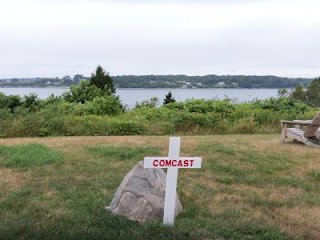 Neal and I finally got our boat in the water and ventured out last weekend. We found a little cove to moor in to have our lunch, and I called Matt to see when low tide was. I just happened to look up when I dialed, and was staring at a pair of eagles sitting on a branch. Of course, we had not brought a camera. So, we went back the next day and the branch was empty. Then one landed, and Neal got this shot of it. As I was watching I said "I wonder where the other one is?". Then the second one flew over the trees and circled our boat within feet. Of course, Neal had his head stuck in a cubby hole cleaning....and missed the picture. We will venture out again this weekend. They must have a nest nearby, but we could not see it.

The bottom picture is of one of our room guests (who obviously reads the blog) handiwork. Trust me, it is a joke....we did not bury the Comcast guy. Actually, we need him to come back, so perhaps we should remove the "joke".

We got some much needed rain last night. Maybe the grass will return to green soon. The weather has been fantastic.

Hope all is well with all of you, Sue
Posted by Log Cabin Maine at 3:34 AM 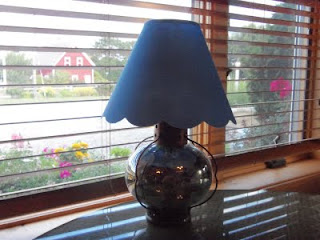 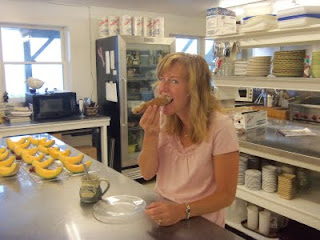 We are trying to get to the bottom of the Cannoli Mystery. A box of Cannoli's were delivered this week overnight from an Italian Pastry Shop in Philadelphia. Anxious to dive into them I read the card and it said " From Bob and Betsy". We do have some very regular guests named Bob and Betsy so we emailed them and they said " No" we didn't send them. Sue then called the Company and they said " Oh no they are from a man named Michael." Now we don't know who Michael is. The cannoli's were wonderful as we shared them with room guests. So Thank You to Michael or whomever sent them. Aimee ( above) is enjoying them as her Breakfast.

Update on the Cedar Beach Saga. The "Friends of Cedar Beach' have stopped negotiations with the property owners. They say all is not forgotten as they will continue to pursue other avenues to purchase the easement.

One day last week I was cooking Breakfast and noticed that we were low on milk. I sent Sue to the local General Store and the next thing I know she came back with this Sea Glass lamp but no milk. She said the lady that owns the store was selling them and she just couldn't resist. Yes it is nice but Where is my milk?

I has been uncomfortably Hot here this week. This great State of Maine is not ready for 90-100 deg temps for days in a row. This is one of the few times I have even been swimming in the Ocean. We are hoping the temps will break tonight and the Weather Man says will bring some below normal temps next week. I for one hope for clouds today as I am on my way to set up the booth for the Nursery School at the Harpswell Festival. This is a Wonderful Festival for children and adults. Tonight they will have a 1970's Disco Band called Motor Booty and they are just fabulous. The music will then be followed by Fireworks. Tomorrow at Mitchell Field as well will be the Lobster Boat Races which you can view from land or sea. A great weekend to be in Harpswell, but aren't they all. 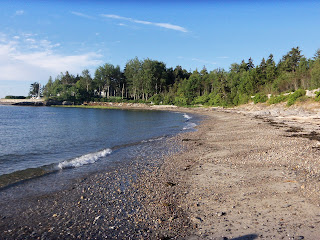 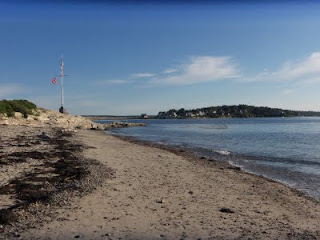 Here are a couple shots of Cedar Beach. I was hoping to have more information on the path to the beach to share, but I have not heard any new news. I do know that the Town of Harpswell, Harpswell Land Trust and the Friends of Cedar Beach are trying to come up with a dollar figure that will buy public access to the beach. The owners originally asked for $950,000, but there are negotiations underway. I certainly hope this all works out for all involved, as it would be a shame for people not to have access to such a beautiful little beach. I am sympathetic to the owners wishes, and so very thankful for all of the years that they have allowed access at no cost.

On a very different note, we have had an extremely frustrating time with Comcast Cable Company. Comcast is changing over its service to digital (I think). Anyhow, we were forced to sign a 5 year contract with them (I say forced as we tried all angles to not do this). Then a Comcast lady in New Hampshire called us and said we needed to set up a time for installation of "boxes". So, we did. And they never showed up. So, we rescheduled, and one guy showed up late with no equipment and said he did not know what he was doing.....so we sent him on his way. Now, we scheduled this around times that would be most convenient for our guests as we are full. So, now, Matt and I are getting really mad.....and trust me, Matt and I do not get mad often, and it is not a pretty picture. So, to make a long story short....after many phone calls(including one to the Attorney Generals consumer office), a sole guy showed up on the third day we scheduled (only one hour late). By this time, Matt and I were seething. Matt said he was going to dig a hole in the back yard and bury the guy if he did not do the job right. Luckily, a very jovial and competent guy named William showed up. Matt said he was too nice to bury, so we offered him filet mignon for dinner if he got the job done. 8 hours later, the job was complete and Matt cooked him his filet and he was on his way! We had informed our very lovely guests about the whole scenario and they took bets on whether William would survive or not. They were happy to see at breakfast the next morning there were no new mounds of dirt in the yard!

Now, Matt is trying to fix the dryer....his job is never ending.

Hope you all are enjoying summer, Sue
Posted by Log Cabin Maine at 7:54 AM 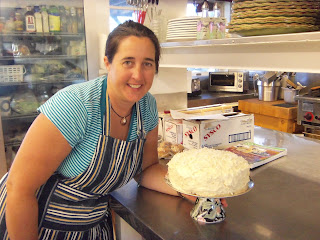 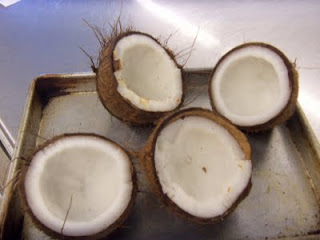 Hi, it is Alicia. I know it is not time for a new blog and it is actually Sue's turn but this is a "Special Addition". Our room guests Kim and Kathy brought me 2 whole coconuts as a Culinary Challenge. I figured what is so hard about cooking with 2 coconuts, 4hrs later..... I really wish I wasn't here alone that night because if someone had this on video it would have been the hottest thing on U Tube. Picture me with a Philip's screwdriver and hammer whacking away at the " eye" of the coconut. Then with the back side of a butchers knife trying to get it open. I kept eyeing the bag of shredded coconut I had under the bakers table the whole time I was doing this.

Thinking the hardest part was over I then realized I have to get the coconut out of the shell, peel the outer skin and then grate and shred it. At the same time I was contemplating all this another guest came into the Kitchen talking to me while drinking her Martini and I almost asked her if I could have some.

In the end the cake came out great. Kim and Kathy were very happy and so was I when they gave me a gift card to get books I can use on my Kindle. Next Coconut Cake is coming from the store.

But I am cooking a Blueberry Pie right now. 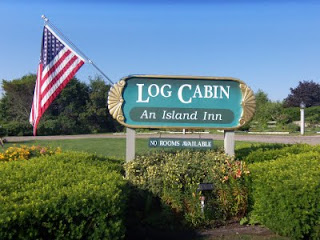 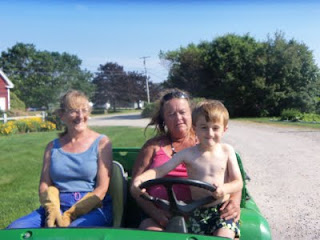 Our returning guests will be happy to hear that there is still public access to Cedar Beach. Cedar Beach is a nice sandy beach within walking distance of the Inn. The "Friends of Cedar Beach" are in negotiations with the property owner to buy an easement to retain public access to the Beach. Many local and " people from away" use this beach as it is the only sandy beach in the area. Stay tuned for the Fundraising events to buy the easement. If interested you can visit the groups Facebook page.

So much to do this weekend. It is Celebrate Summer in Harpwell. Thirty Three local art, crafts,food and music venues will hold an Open House. You can find a full list of activities at www. harpswellmaine.org. The Bowdoin College Music Festival along with their Professional Theatre Group is in full swing.
Every Wednesday in Downtown Brunswick they are having free outdoor concerts from
6pm-8pm.
I see the Casco Bay Ferry going by the Inn every day and it looks like quite a few people are enjoying a nice 2hr ride.

We have had some fabulous weather lately. The pool has been busy. I actually made the first trip of the season, it is so nice and warm. The flowers are blooming like crazy. Sue is complaining about watering them and I tell her that is what you get for buying so many. My son Terrence is in the photo above working for his pool time.

Since it is my turn to write the blog I will give 10% off the room price to anyone who books the Harpswell Room any time during the last two weeks in August. It is a 3 night minimum. Now I am going in the kitchen to enjoy some fresh roasted corn salad on a bed of lettuce from the farm.

Enjoy the Summer---Alicia
Posted by Log Cabin Maine at 3:40 PM 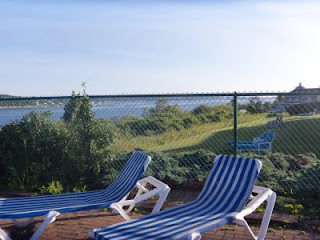 Eight years ago today, my grandson Danny was born. He is a very bright and funny child, and he is so loved by our whole family (including his little brother, Josh). For those of you who do not know, Dannys parents, Matt and Aimee, and I all work together here at the Inn.....so, Danny and Josh are here often and just live up the road. I am one lucky grandmother!!

I took this picture from the pool at 6am. This is a perfect pool day...hot and sunny. The pool is 84 degrees and you can enjoy the view of the 60 degree ocean. A few hardy souls do swim in the ocean....myself, I prefer the pool.

Fourth of July weekend, and there are many folks here on the island. We are full fortunately....gas prices have not stopped our clientele so far. We do have some rooms left in July, so come see us!

Have a safe and happy holiday! Sue
Posted by Log Cabin Maine at 6:38 AM