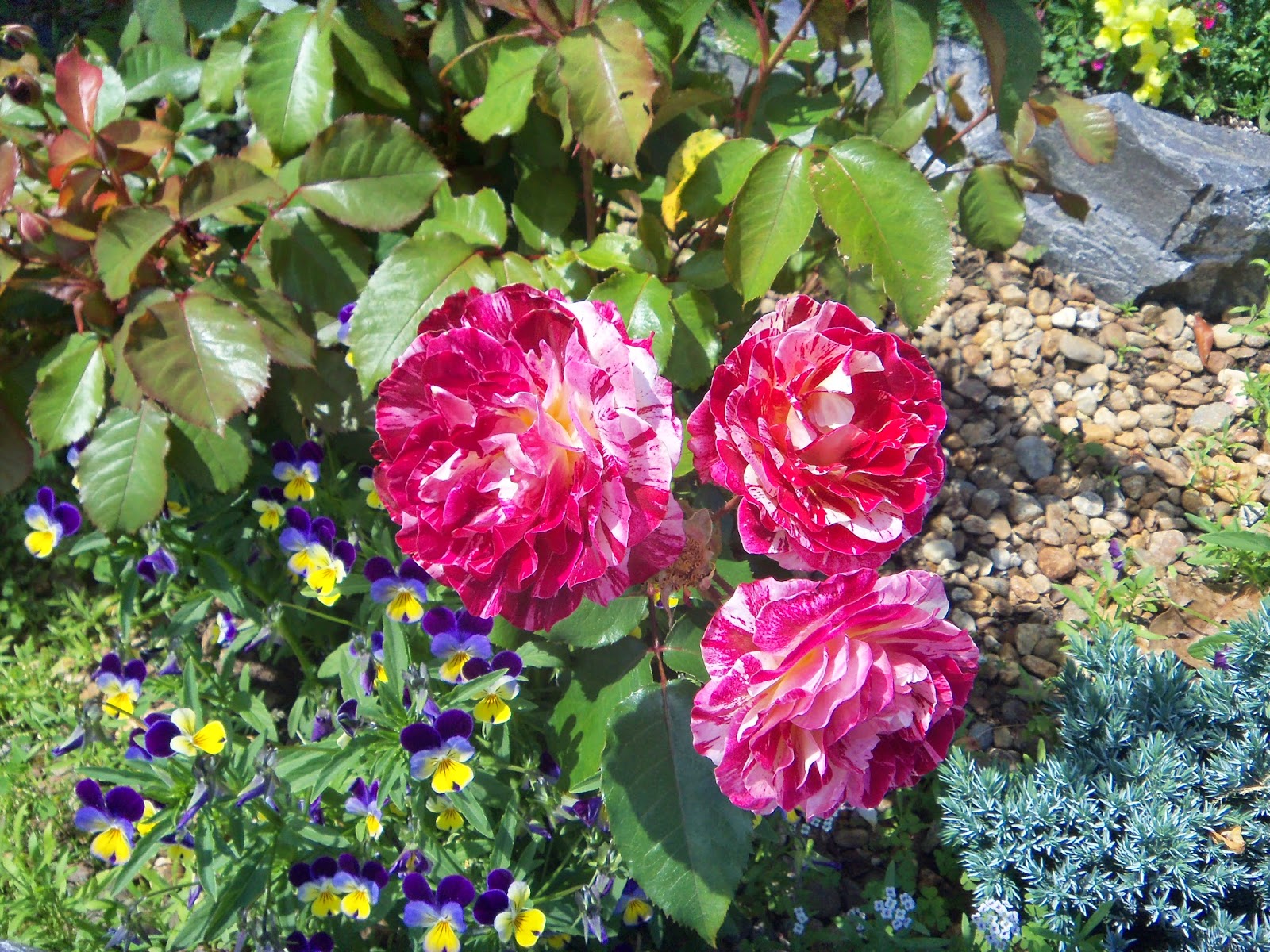 This is a picture of our new rose bush. The winter got the best of the one that was there. I love this one.....looks like a carnation! The weather continues to be perfect....lots of sun, nice and warm, great breeze today. The island is hopping......I think the whole world has decided to check out Bailey Island. It is a beautiful, peaceful place.
We have been quite busy. We did get a cancellation for a room for 2 weeks in July, so that opens up some space. I am sure it will fill quickly. We also took on another "project". We bought a house on the island to renovate and rent out as a weekly rental. It has consumed a lot of time for the past 2 months, but it is very close to completion....another couple weeks. When it is done, I will post a link to its site. It's turning out quite nice. For those of you on FaceBook it is on there under West Shore House. Check it out!
Well, I must go water gardens and type in reservations. Hope you are all well.Sue 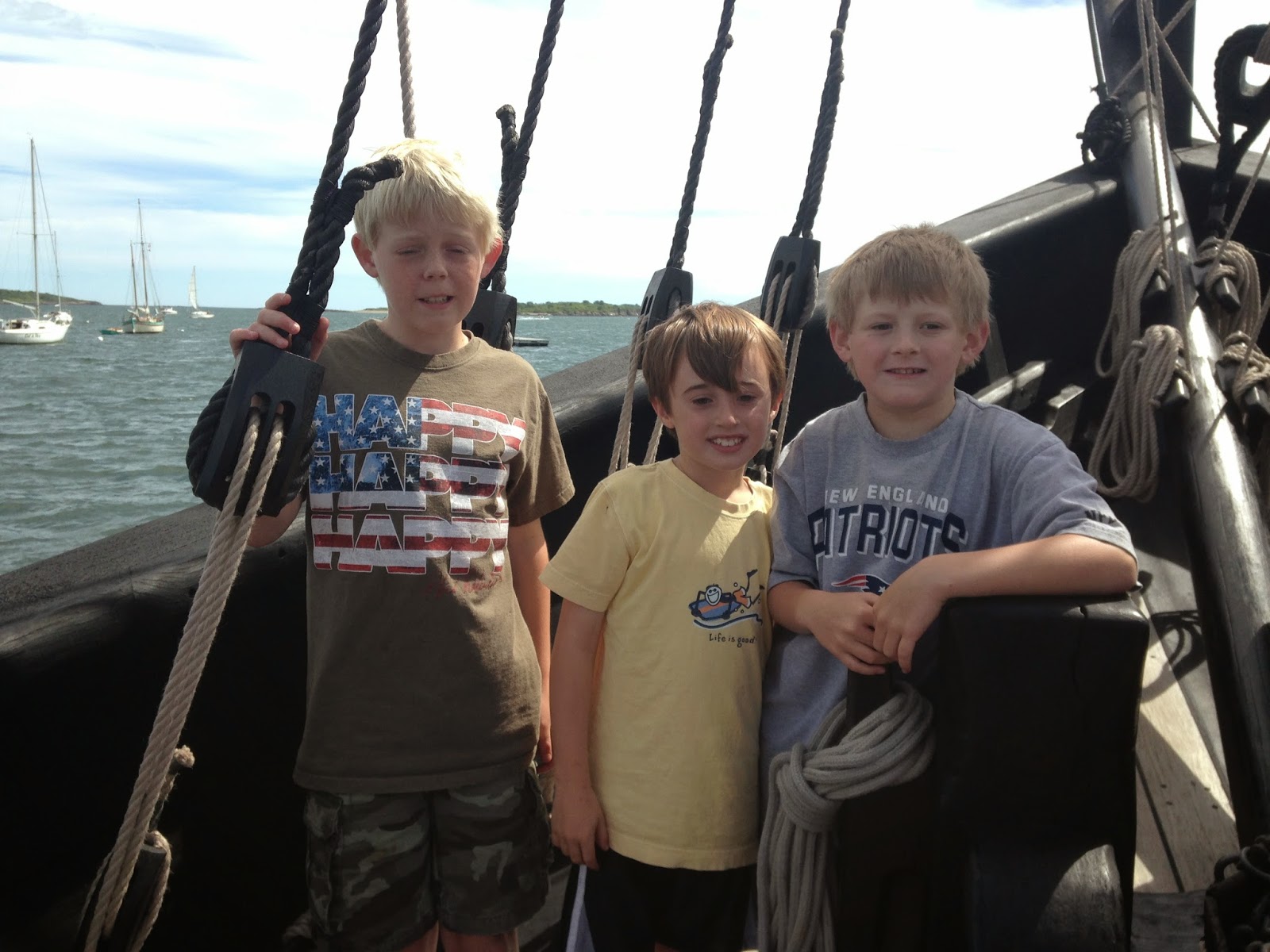 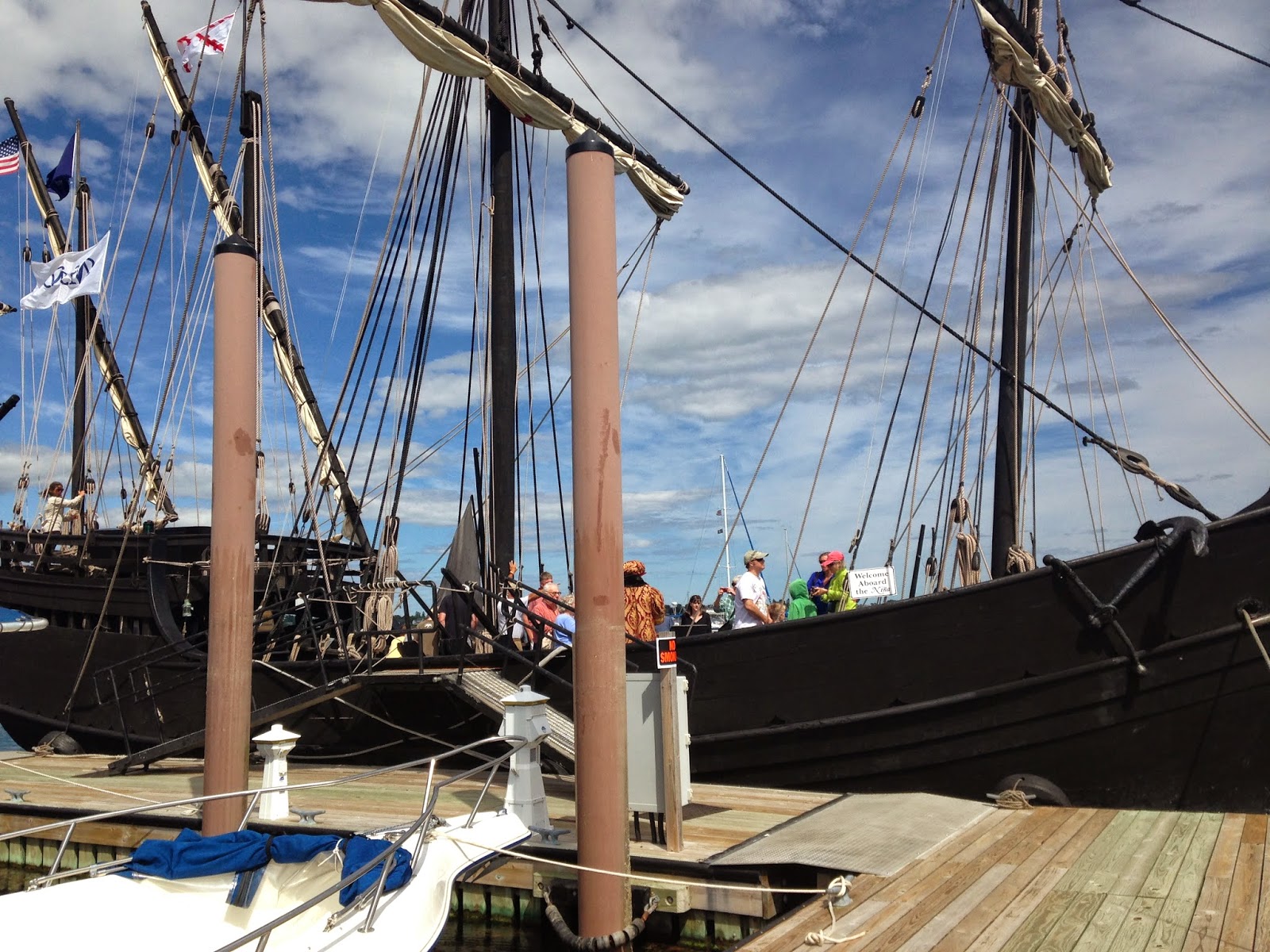 Area Residents were in for an educational treat this weekend when Replicas of Christopher Columbus's Ships the Nina and the Pinta were docked at Dolphin Marina.  The ships were open to the Public throughout the weekend. The Nina was built by hand without any power tools. It is considered to be the most historically correct Columbus replica ever built. The Pinta was built in Brazil and is  larger. After their stay at the Dolphin the ships will then be in Camden and Portland and continue on their tour. As you can see Christopher Columbus was met by Danny, Terrence and Josh.

Speaking of Sailing Ships, the Windjammer Days start in Boothbay this week. It is quite a sight to see all those Sails coming in during the parade of ships. Bailey Island's own Alert Schooner will be Sailing this year. The pool is finally seeing some use with a few warm days and a repaired pool heather. Now that School is finally out I am sure a few of our resident kids will take advantage.
If you are here around July 4th, Cooks Restaurant will hold their Fireworks on July 3rd this year. We have some rooms still available for July so don't be shy and give a call. 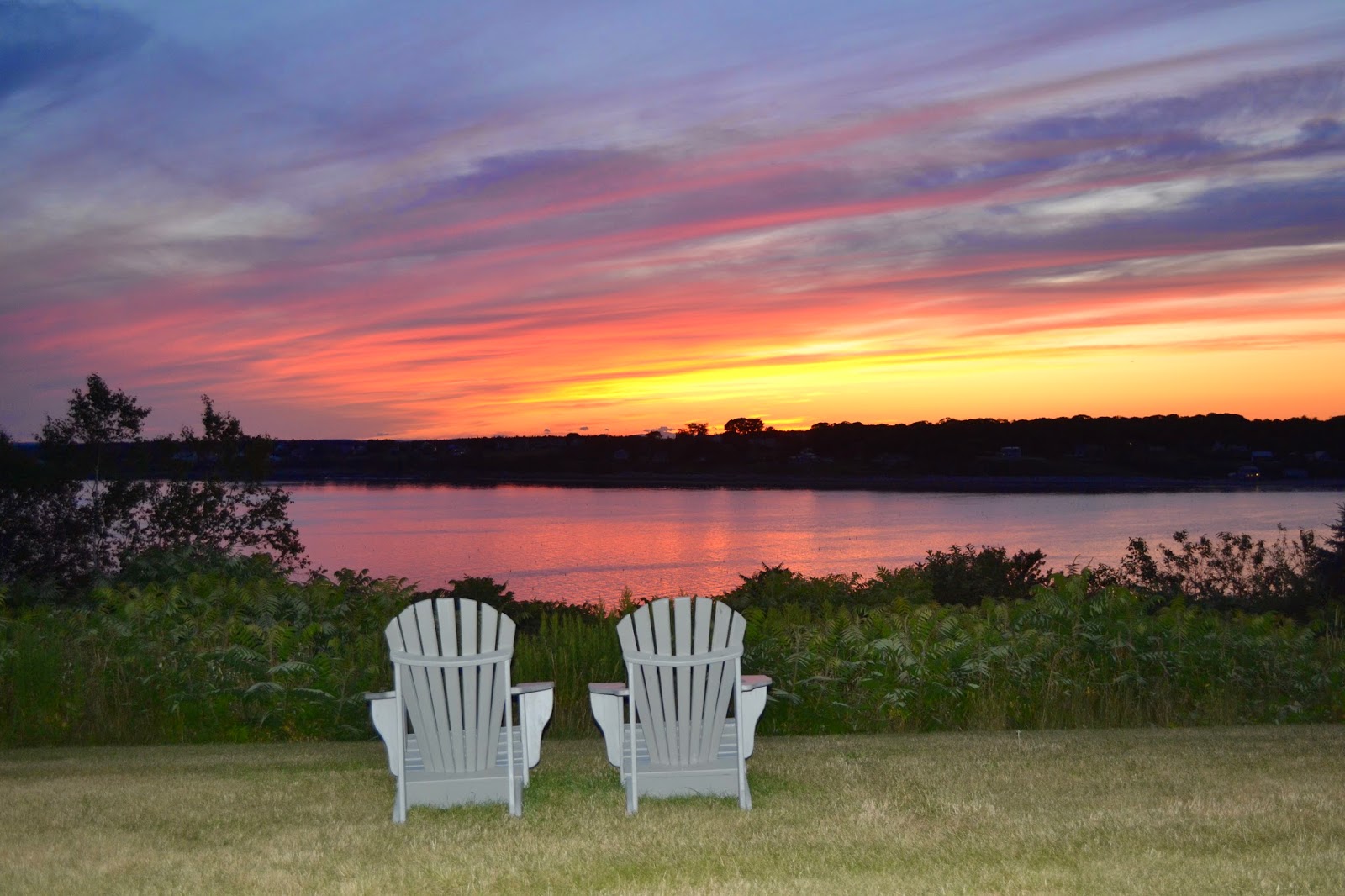 Summer officially arrives in 6 days. Longest day of the year! Sun sets at 8:26 that night. The Inn is a spectacular place to sit on the deck of your room and watch it set. Most nights you can see the outline of Mt. Washington. This particular photo is a bit to the left of the Mountain. Even on some cloudy days, we manage to get some sort of sunset. For those of you who are not familiar with the Inn, all 9 rooms have decks that face west.

We are very busy this year. I think there are only a couple weekends all summer with any room openings. We do have rooms during the week here and there if you would like to come see us. I am writing this during breakfast, and the smells coming out of the kitchen are making me hungry! Chocolate muffins, sausage and waffles with a maple cream sauce....yum!

Happy Fathers Day to all of the Dads out there. The weather is suppose to be perfect here on Bailey Island tomorrow. 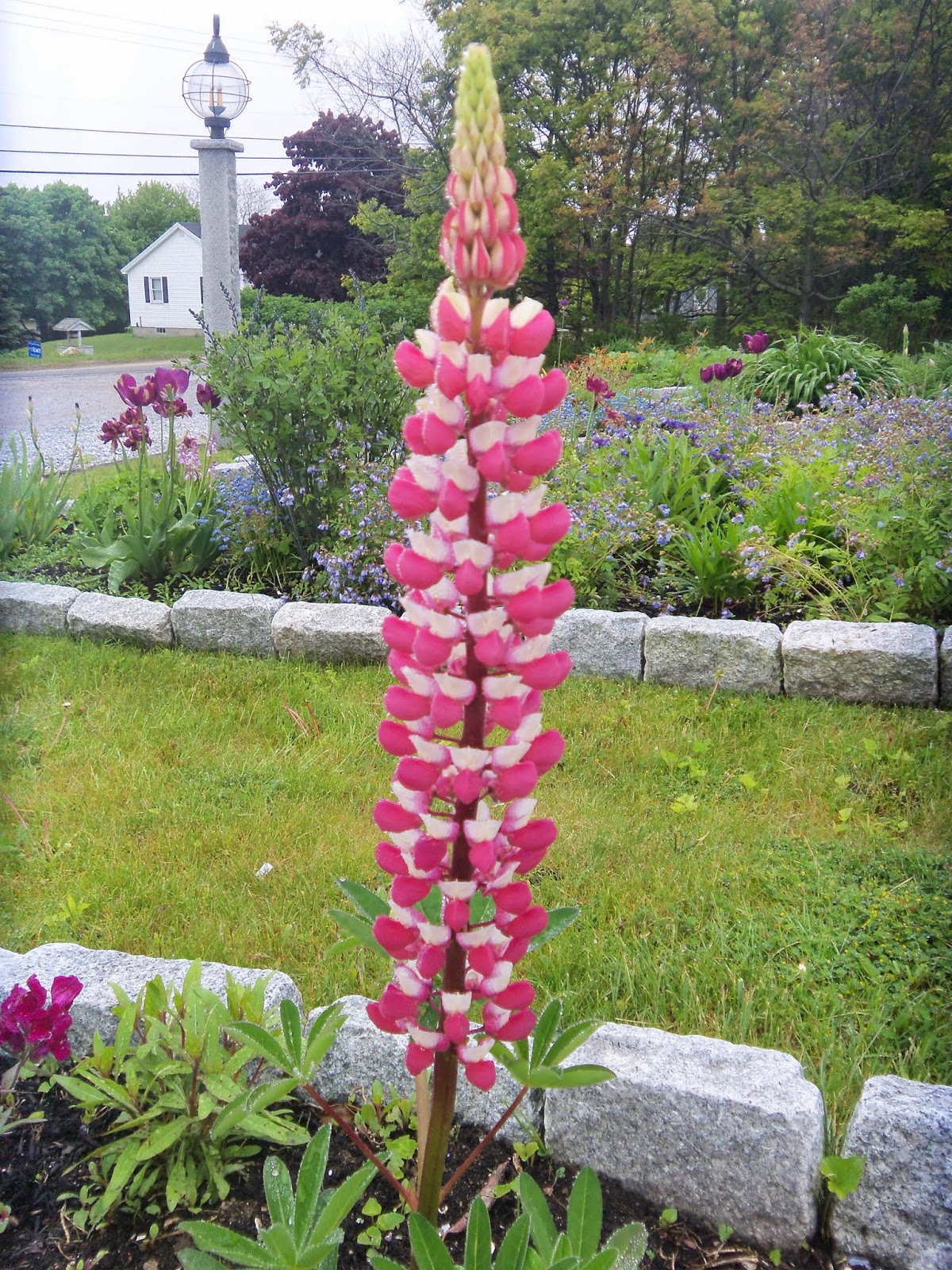 When I see the first Lupine Flower of the Season I know it must be June. I love Lupine. I like all the different colors. I like seeing them on the side of the road along the Highway, all around the Islands and here in our very own yard.

I  also like June for many reasons. First of course being my Birthday on the 7th. Then the start of the Music Theater at Bowdoin College. Sue saw Buddy Holly yesterday and said it was fabulous. The Harpswell Hiking Challenge which is this weekend. Hike all 10 trails in Harpswell in 2 days and you shall be a Hero. It is the Windjammer Festival in Boothbay at the end of the month. The kids get out of School on the 19th ( so many snow days).  That will also be the start of our sought after Fridays at Stovers Cove in Harpswell. After the Winter and Spring of snow and cold those days are eagerly awaited by so many. The Sailing Schooner " Alert" has started its daily runs from Cooks Lobster House. It is so pretty to watch them Sail by at night during Sunset.

Matt has officially turned on the heater in the pool and I have a feeling it will see its first use this weekend.

June is getting busy in the rooms but we do still have some openings so give a call and come check out all these fabulous things to do.